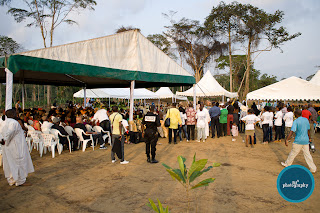 The day had finally come.  It was more than a year in the making. Out of delegation of 87 participating in the ARP 2, there were more than 20 who were making a return trip, in part, to receive titles for 1/4 of an acre that was given during ARP 1.

The land, which is 5 acres and located in Kribi, was gifted to us by Nathan Simb, a business owner.  Simb had saw coverage about ARP 1 on Cameroonian television and was moved to give the land, free of charge and expectation, to all ARP 1 participants, regardless of a DNA tie to Cameroon. The land ceremony was the first time that most of the ARP 1 participants were able to see their land. Founded in 1889, Kribi is located near the Gulf of Guinea which runs into the Atlantic Ocean.  The original name of Kribi was Kiki Ribby which means little people. 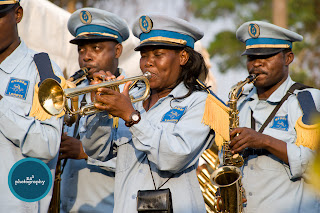 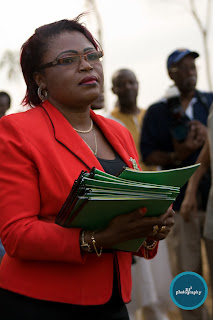 The land ceremony was extremely touching.  The minister who presided read Psalm 130 which detailed the Israelites journey.  Choirs sang Cameroonian and negro spirituals, which included “We Are No Longer Afraid.” The mayor of Kribi II, Sabikanda Guy Emmanuel, and Eric Chinje of ARK Jammers also shared kind words about the land gift and ceremony. The people of Kribi were happy about the land gift and shared cheers, smiles, and hollers as Mayor Emmanuel and Eric spoke.

Next, each of us were called up one by one to receive our titles, by hand, from a notary public.  We were also partnered with a host family from the area who would take us on a tour of our individual plots. I couldn’t believe the size of it.  I could easily build three buildings at the site and have more than enough space for a front and backyard.

I had carried rocks from the land that my great grandfather, Louis Balfour Atlas, Sr., owned in Lake Providence, LA with me to Cameroon.  As I walked my land, I placed those rocks in the soil.  I wanted a piece of our family to return, and by placing the rocks, I felt like I did that. My great grandfather was one of the first land owners in our family and I am possibly among the first land owners in our family in Africa.  He had only a sixth or seventh grade education.  I am a college graduate.  He wasn't able to vote, but paid poll taxes.  I am active voter and voted in the first African American president.  In four generations, we made significant strides.  In seven generations, we returned back to our country of origin.  Now, 10 generations descend from our progenitor who was taken from Cameroon.

Mr. Simb then invited everyone to his home for a excellent dinner.  I had been waiting the whole trip to have shrimp since the country’s name means shrimp.  I was not disappointed and took more than my share.  *Laughs*

The dancers during the dinner were fantastic.  One of the things we’ve seen for the first time during this ARP is a Cameroonian bottle dance where dancers balance bottles of beer on their heads.  The first time we saw the dance was the previous night during the concert.  We’d never seen a person balance four bottles on their head at one time. Dancers at the dinner did a similar routine. 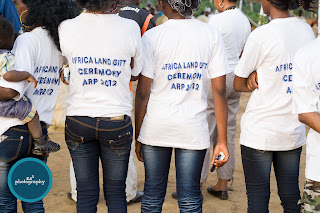 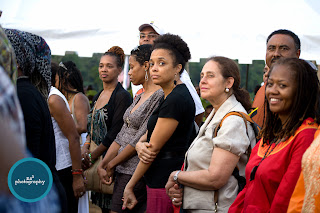 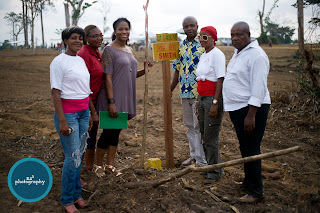 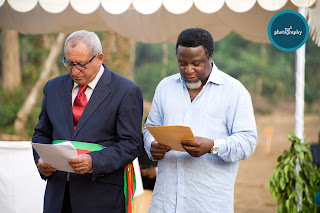 LindaRe said…
You now have your piece of Africa. I hope you build a place of comfort, a garden, enjoy...I am enjoying following your trip.
January 7, 2012 at 8:21 AM

Anonymous said…
By the description of the dance you gave, it sounds like the assiko dance of the Basaa people of Cameroon. Add'ly his name, Simb, is a Basaa name. Bottle dances used to exist in the US in the south, but no longer. The US bottle dance came from the Congo-Angola people (where most of our ancestors came from).

There is a bottle dance ro be found in Ecuador, though it does not at all resemble assiko.

The president is Kenyan-American. Common African thread but a very different history, experience, perspective, linguistoc culture, religious development/culture and shared experience. Also he has waged war in Ivory Coast, Libya, and now Uganda and the Congo all for the sake of reinstating colonial control of the resources of these regions in a proxy war with China, using AFRICOM as the military arm to carry out this war and genocide. Voting for him is little for us to be proud of. Read Black Agenda Report for more info or search AFRICOM on Youtube.

Cameroonians and much of Africa now despises Obama for his wars on Africa. Ghana and Nigeria especially will continue to be pro US and pro Europe particularly because Nigeria is getting a lot of revenue from the US for the export of their crude oil.
April 3, 2012 at 1:55 PM