Sharing Genealogy With the Next Generation

On February 15, 2011, I began working with a new program facilitated by Alameda County, CA Supervisor Keith Carson called the Ancestral Project.  This new program merges personal storytelling and genealogy so that participants are given the opportunity to learn about themselves and are given the skills to communicate what they’ve learned to their communities.  I learned about this project through the African American Genealogical Society of Northern California (AAGSNC), of which I am a member.
The first session was held with youth involved in the Culture Keepers program at McClymonds High School in Oakland, CA.  At first, the students seemed sort of indifferent about the whole project.  I am thinking that this is because they weren’t exactly sure how genealogy related to their current reality.  Let's be honest, this high school is in a urban community where finances definitely outweigh family history research in terms of concern and importance. Every one of these youth has a story or a set of circumstances that are unique.  The key was to get them to understand that their current reality and circumstances are not based entirely on current history, but that they are based on who preceded them and the foundation that they laid for them.  Another key was helping the students understand that they are also laying a foundation for those who will come after them.


First, I gave a short presentation on the basics of genealogy, such as starting with yourself and going backwards from you to your parents, grandparents, etc.  We also broke up into groups to get the students juices flowing about their experiences growing up.  I initiated the topic of “The first place I ever lived…” which I hoped would lead them to think about information regarding their family and to understand that they have a history themselves.  These discussions went fairly well and included typical genealogical road blocks such as the burning of a childhood home and being the first generation born in the United States. 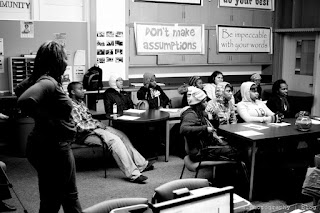 From there, the youth were given the opportunity to fill in pedigree charts and family group sheets using the information they already knew about their families.  Although I would by no means call myself old, I definitely felt a generational divide between me and the students.  Some of their parents had never been married, so when they saw the words husband and wife on the forms, there was confusion on whether or not to list their parents in those spots.  Another example of the divide was the fact that the youth are anywhere from 3 to 5 generations removed from the 1930 US Census, which is the last census that we have available for genealogical use.  It was definitely a new dynamic added which will provide some interesting challenges for conducting research.  Following this, we reviewed this helpful checklist which will give the students clues on how to find information in their own homes.

Next, I used performer Michael Jackson's maternal genealogy as a test case.  It’s obvious that this part of the presentation made an impact on the students. In this portion of the presentation, the youth were taught how to use the pedigree chart, family group sheet, Ancestry.Com, and Google to search for information. Packets were given out that included his grandfather’s obituary, his great grandfather’s draft card, and his great great grandfather’s 1870 census record.  The students were shocked as I went, column by column, through the census record.  Many of them couldn’t believe that most of the people on the page couldn’t read or write and I had to explain why this was the case.  The students also were offended by the fact that African Americans were referred to as Negro or Colored.  This lead me to explain to them the history of racial designations for African Americans. 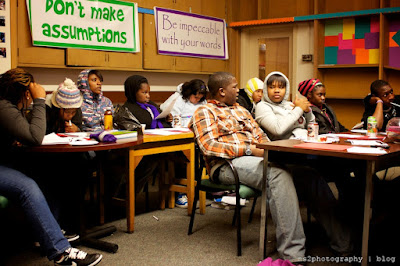 After we conducted the Google search, we were lead to Jackson’s great grandfather’s death certificate. As I went line by line reading the handwriting, I asked the students for their thoughts on how the lives of the two family members were similar and different.  One student noted that Jackson was nearly the same age as his great grandfather at death and that his great grandfather had to work harder and differently than he did.  These were great observations. The students also noted the fact that they would have to read actual handwriting rather than typeface when they read documents.  I told them that it was an acquired skill. *Smile* Death certificate of Prince Scruse, maternal great grandfather of Michael Jackson.  Courtesy of FindAGrave.Com
Once I finished going through Jackson's maternal genealogy, I asked the students for their thoughts about the project.  Most of them were really excited about it, which was a marked difference from where things were when I first started. Many of the couldn't wait to get started.  One student had apprehension about speaking with a grandparent that never shares information or documents.  I, and others in attendance, gave the student some pointers on how to work with the grandparent.  I later learned that the student's grandparent opened up and gave them a huge stack of obituaries, with death certificates and social security cards, stapled to them, for members of their family.  That was a HUGE break!

In addition to tracing their genealogy, the students will have to put together a project that will show what they've learned which will be presented in May 2011.  I will be meeting with the students on a continual basis until then and can't wait to see what they will share.  There are four other volunteers from the society who will also be assisting with the class.  The program will also expand to include youth from Beyond Emancipation, an Oakland based organization that supports former foster youth, as well as students from Berkeley High School. 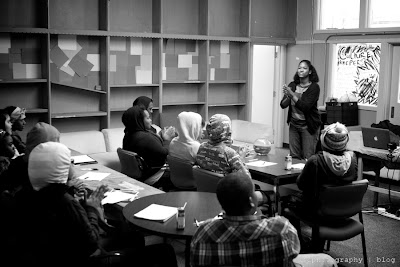 Taneya said…
This is an excellent post and I thank you for sharing your experience of how you worked with the students! I will be assisting my husband this summer with a program he's starting and am surveying methods of teaching genealogy to middle/high schoolers and your approach provides an excellent example! I would love to speak with you further. Please do email me - about.me/taneya
February 26, 2011 at 5:03 PM

Nicka said…
Taneya: Thanks for the wonderful comments! I'll definitely contact you regarding more details.
February 27, 2011 at 11:06 AM

Professor Dru said…
I love your approach with using the records of Michael Jackson's maternal ancestry.